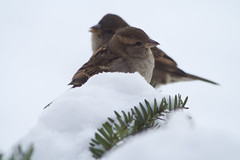 Partners
Originally uploaded by ffg
I only ever take pictures, and maybe a few of them don't suck.

Morning hair maintenance now consists of a little pre-electric shave lotion and about 45 seconds with my shaver.

Right on schedule (about 4:40 PM Tokyo time) we landed at Narita, which posessed the weird placelessness common to all airports. I knew I was in a foreign country because the announcements over the public address system were in Japanese first, then English, but otherwise, basically, an airport’s an airport. I went through the passport check and customs inspection uneventfully, though it did slightly bum me out that, out of the 10 or so inspectors checking passports, I got the scary guy wearing one of those SARS-masks (the only one of the inspectors wearing one.) That shit freaks me out — the only Americans wearing things like that are Michael Jackson. The passport / customs pricess went very smoothly, considering how many people (several hundred) were going through at the time I was there.

I picked up my suitcase and headed into the ground transportation area at Narita and had my first encounter with several thousand people heading in dozens of directions, all very much more sure of where they were headed than I was. This was to be one of the themes of my trip. At my third bus counter, I found the correct bus line and got my ticket for Omiya Station. I walked out into the beautiful clear evening and got my first taste of Japan. It’s warmer here than in Detroit — high temperatures have been hovering around 75F / 24C most days. Japan doesn’t do Daylight Savings Time, so it gets dark around 6PM.

My bus arrived at precisely the scheduled time, which is how things work here. The bus ride was a fairly long one, nearly 90 minutes. We must have travelled on 4 ot 5 different highways on the way to Omiya. It seems that all the freeway signs had Roman place names as well as Kanji, but I still imagine it would be terrifying to try to drive somewhere as a non-Japanese speaker.

I arrived at Omiya station shortly before 8PM. A couple of Americans working for a local company who were in town for a few weeks saw me and waved enthusiastically. It turns out that they thought that I was another gentleman coming to work with them from the US. They were very helpful, and, I could tell, quite homesick (they’d been in Omiya 3 weeks, with another week to go.) They got me pointed towards my hotel, and even walked me part of the way there.

I checked in at the counter and noticed a group of about a half dozen sumo wrestlers across the lobby. They were being fussed over by a couple of attendants — I don’t know whether they were their hosts or their management staff. Being a good tourist, I couldn’t resist the temptation to make this the very first picture I sent back to the folks at home.

An attendant took me upstairs and I dropped off my luggage. This was my first exposure to Japanese hotel rooms, which are very, very, very small. My room in Omiya was about 10 feet / 3 meters on a side, not counting the short entry hall and bathroom. It was dominated by the bed, with a very small desk (with a tiny LCD tv) and a small stool against the wall to the left. The ceiling was maybe 7 feet or so high. After a few minutes, the phone rang, and my compatriots from our Japanese office: Kokubo, Taka, and Mai let me know that they were downstairs. I knew them all from their previous visits to our corporate headquarters in Troy, MI. 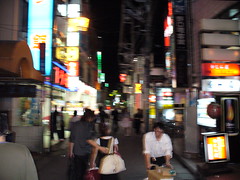 We went back towards Omiya station and out of the opposite gate and into the other side of town, which is neatly bisected by the train tracks. The general pattern in just about every area I’ve visited in Japan is that there tends to be a large number of retail and food establishments clustered near every train station. This actually makes things convenient for visitors, as it’s possible to get food and grab necessities from convenience stores and such all without having to worry too much about getting lost. I quickly figured out that I was never truly “lost” as long as I kept straight in my head where the train station was. 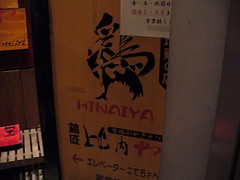 We headed off into one such retail quadrant in Omiya, and my hosts had selected a traditional yakitori restaurant. This was my first exposure to Japanese-style dining, where you order many small plates which are then shared communally around the table. The staff brings out a plate or two, which everyone takes a bit from, then, as the meal progresses, you order more and more small plates. The very first plate consisted of chicken sashimi, taken from the wing, thigh, and breast. Okay, now, as an American, I have a confession to make. We Yanks, in general, have a problem with raw. Many of us, myself included, have gotten past this and enjoy various seafood sushi and seafood sashimi. But chicken? Chicken? Culturally, speaking as an African American, our tradition is to regard chicken as a fairly “dirty” animal that you, well, cook the shit out of. I might eat my beef medium rare, but generally speaking, even the slightest bit of blood is enough to totally turn me off a chicken dish. Chicken is eaten well-done or not at all.

So here I had this frankly beautiful platter, perfectly balanced in color and texture with various garnishes, condiments, and accents, featuring several wafer-thin slices of, um, raw chicken. What did I do? I took a long pull on my Asahi, speared a likely looking piece with my fork (more on this later), dipped it in soy sauce and, accompamnied with a small bit of wasabi, placed it in my mouth, chewed a few times, and swallowed. I then took another long pull on my Asahi. Everything from there on was easy, though. We had a number of delicious vegetables, many of which I’d never even heard of before. Everything was strikingly fresh, crispy, aromatic, you name it.

We exited into the night air and my hosts walked me back to my hotel. I got back at about 10:30, and promptly fell into dreamless sleep. Not counting a couple of catnaps on the plane, I’d been awake, as far as my body knew, 26 hours. By the clock, I’d been up 38. Yep. 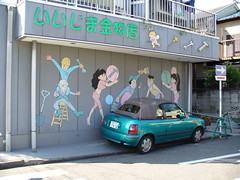 Building mural
Originally uploaded by ffg.
Walking back from lunch in Kawasaki.

I’ll skip over all the chicken-with-my-head-cut-offness of my preparation, as it’s completely uninteresting to anyone but myself… actually, it’s not even interesting to me.

I planned to leave myself plenty of time to get to the airport, check in, and clear security. I arrived at the airport at about 11:45 am for a 2:25 pm flight. Since I’d left myself so much extra time, of course, I flew through security in record time. As much as I usually bag on our local institutions, Detroit Metro Airport’s McNamara terminal really is a well-oiled machine. I checked in at the Northwest counter, checked my baggage, and cleared security by 12 noon, for an international flight. That gave me plenty of time to kill before my flight boarded, so I took out my laptop, but I got the old “sign up for Boingo” cockblock instead of the free WiFi that is the inherent right of wired travelers everywhere. Bah. I reholstered the laptop and opened my official airport book, Jonathan Strange and Mr. Norrell. I’ve been reading it forever, because, though I’m enjoying it immensely, I seem to only read it when I’m flying and it’s about the size of a telephone book. I grabbed a torpedo at National Coney Island, and they announced boarding for NWA flight 25 to Tokyo Narita airport right as I returned to the gate.

A Boeing 747-400 is a truly enormous airplane. This was my first time aboard one, and it really is striking how very much plane there is there. That said, when you pack over 400 people onto one (it was a completely full flight), coach class becomes the same miserable crampfest that it is on every other airplane. I so dearly wish I’d had enough miles to go for the business class upgrade. They basically get sofas up there. And personal video monitors. And pie. There’s always pie…

So I got a cramped seat over the wing (so much for seeing landmarks as we flew over), where I proceeded to sit. For the next 14 hours. They fed the plane’s GPS and weather data into a cool display, that constantly updated our position, heading, and the outside temperature, at least when the screen wasn’t showing the in-flight movies or the NWA ads. That was really cool, though unfortunately we had a very non-chatty pilot. I always enjoy it when the captain takes time to point out landmarks as you fly over them, but after giving us a status update on our departure delay (we had to hit a certain window for when out path would be clear through Russian airspace) he pretty much stayed quiet for the whole trip.

As I mentioned, there were in-flight movies, which I had a limited view of because the woman in front of me had the world’s largest head. I mean, seriously, this woman had a freaking pumpkin sitting on top of her neck, and a semi-bouffant besides. To make it worse, she and her husband weren’t even watching the in-flight movie, they had their own DVD player and phones, but I still had her colossal head directly in my line of sight. The films were RV, which I watched without the headphones by halfheartedly reading lips, and I think I got the gist of it well enough (i.e. a less-funny National Lampoon’s Vacation with Robin Williams in the Chevy Chase role and Jeff Daniels in the Randy Quaid role), Inside Man, which, at least the parts I got to see around Madame Bighead, seemed like a pretty damned good “Topkapi”-type caper film, and some horrible Lindsay Lohan thing, which for some odd reason didn’t feature her snorting barrels of blow and passing out in a club bathroom.

I really didn’t manage a lot of sleep on the flight. I was just too darned uncomfortable, for the most part. I had a scare about 3/4 of the way through. I got a stomach ache, which I eventually decided was just a touch of indigestion, but the last thing you want 3 weeks after abdominal surgery when you’re on an airplane over the Pacific Ocean is stomach pain. Nightmare scenarios started playing themselves in my head. Thankfully, the pains retreated on their own. 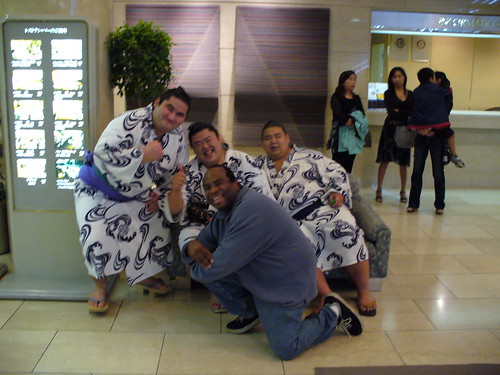 That was a very long plane ride... Time to sleep.

If you’ve been keeping an eye on my del.icio.us links, you may have noticed a theme over the last couple of weeks… Yes, I’m going to be visiting Japan on business— specifically, I’ll be staying a couple of days in Omiya (Saitama) and about a week in Tokyo (Shinagawa /Minato area.) I’m really excited about this trip.

I’ll be taking pictures and, depending on how much net access I have, I’ll try to post here semi-regularly and drop
reasonably current pics in my Flickr stream. I have no idea what sort of phone I’ll have there, but I’ll at least try to monitor my gmail account (marmoset) so if, by some
coincidence someone reading this will be in Tokyo during the second half of next week / weekend / early the following week, drop me a line.

I've been informed that it's National Emo Kid Beatdown Day.

I figured this was fake.

All the cool kids are doing it…

Stop by and say hi.